The Ambassador of Sri Lanka to the Republic of Korea, Dr. A. Saj U. Mendis, called on the Co-Chief Executive Officer (CEO) & Chief Global Strategy Officer of KB Financial Group of Kookmin Bank, Mr. Cho Nam Hoon, recently, at the Corporate Head Office in Seoul. He was accompanied by his deputies and assistants during the 90 minute discussion. Dr. Mendis outlined, in detail, the potential sectors and areas as well as other economic and investment opportunities and vistas in the country, thus encouraging the Kookmin Bank to be engaged with Sri Lanka since Mr. Cho Nam Hoon, who holds the designation of Co-CEO and Senior Managing Director of KB Financial Group of Kookmin Bank. Ambassador Mendis also enunciated to the top most management of the Kookmin Bank of the untapped immense potential of Sri Lanka in the context of economic, investment and commercial sphere, amongst others. 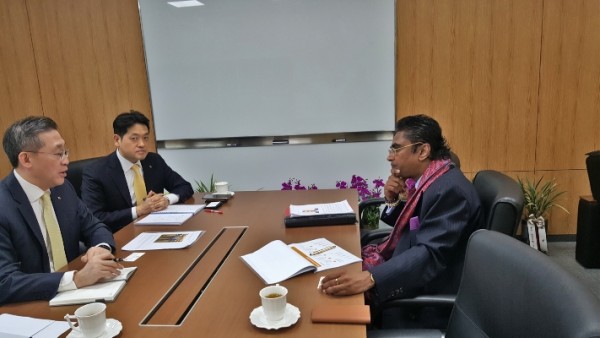 The Kookmin Bank expressed sincere and deep interest in Sri Lanka since they have already been engaged on a mega investment with a highly reputed “Blue Chip” Corporate in Sri Lanka, LOLC Group, recently.

For record, the LOLC Group has rapidly evolved from being the pioneering entity in leasing in Sri Lanka in 1980, to its current status as a truly global conglomerate with a diversified portfolio. Over the years, LOLC has functioned as a catalyst in transforming communities and uplifting grassroots level entrepreneurs through its sustainable inclusive financing approach. Lauded for their tangible social impact and developmental role in microfinance in Sri Lanka, the LOLC Group has now established itself as a leader in the Micro & SME industry in the region, with operations in Cambodia, Myanmar, Pakistan, Indonesia, Philippines, Nigeria and Zambia, with several other strategic locations identified in the pipeline. With this rapidly expanding international footprint, the Group is well set to become the largest multi-geographic Micro-SME Finance platform in the world.

The KB Financial Group of Kookmin Bank is the largest commercial bank in the Republic of Korea with total assets of over USD 430 billion and Assets Under Management (AUM) exceeding USD 650 billion respectively. The top most management of the Kookmin Bank stated that they are eagerly and fervently seeking for viable and feasible financial, economic and investment opportunities and projects overseas as a means of diversifying their investment portfolio. In this context, the key person of the KB Financial Group of Kookmin Bank is the Chief Global Strategy Officer and Co-CEO, Mr. Cho Nam Hoon. Dr. Mendis stated to Mr. Hoon that the Embassy would transmit any viable and economically feasible projects and investment opportunities as and when they arise in Sri Lanka, in which the KB Financial Group of the Kookmin Bank added they would be most interested.

It may also be noted that Ambassador Mendis underscored the criticality as well as the potentiality of FDI and FII in Sri Lanka as the Government considers it as a potent and cogent economic pivot. Also, added that the Price/Earning (P/E) Ratio of the Colombo Stock Exchange is one of the lowest not only in South Asia but in the world, thus making it highly attractive to potential institutional investors to commit Foreign Institutional Investments (FIIs), in particular. The P/E Ratio of the Exchange is around 10.8 and Dividend Yield is 3.2% which are most attractive and enticing, whereas most of the Exchanges and Equity markets have a P/E Ratio of well over 18. Dr. Mendis also accentuated the return on investment (RoI) of the debt market of Sri Lanka as well, which is quite striking and appealing compared to the Debt markets of a large number of countries. It was heartening to note that the KB Financial Group of Kookmin Bank was much interested to be engaged with Sri Lanka’s economic projectile and trajectory.