Dr. A. Saj U. Mendis, Ambassador of Sri Lanka, had an expansive and fruitful discussion with the President of Ghent University Global Campus, Prof. Dr. Taejun Han, recently at the Office of the President at the Ghent Campus, last month. President Prof. Han was associated, during the discussions, with the Vice President of the University, Dilruk De Silva, a Sri Lankan national domiciled in the Republic of Korea. The discussion focused on strengthening, deepening and widening academic relations and affiliation amongst the Ghent University Global Campus and select universities of Sri Lanka. President Prof. Dr. Han stated that such affiliations and associations would lead to greater cross fertilization of intellectual capital and knowledge amongst the universities including the students and faculty. Further, Dr. Mendis broached the proposition of having Sri Lankan students to study at the Ghent University, probably, for a period of one or two semesters or to complete the entire degree program. Both President Prof. Han and Vice President De Silva expressed interests and eagerness to explore such arrangements and associations with select universities and academic institutions of Sri Lanka, along with the Ambassador Dr. Mendis, thus mutually benefitting not only the universities engaged but also the intellectual base and capital of both the countries. 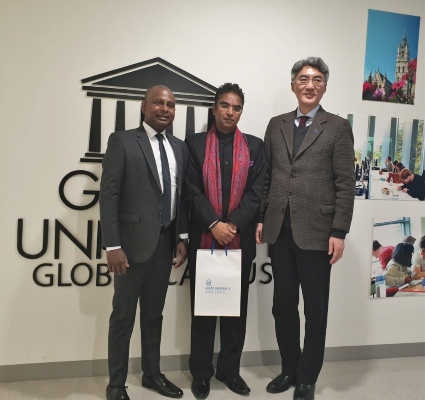 President of the Ghent University 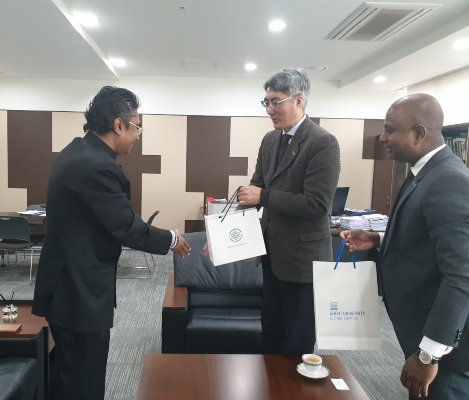 President Prof. Han and Dr. Mendis exchanging pleasantries and gifts whilst Mr. Dilruk De Silva looks on. For record, Ambassador Mendis gifted Sri Lankan Tea, known as Ceylon Tea, to both the President and Vice President, which they loved very much