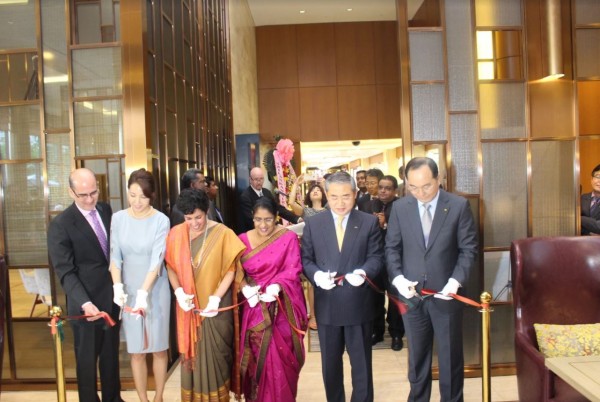 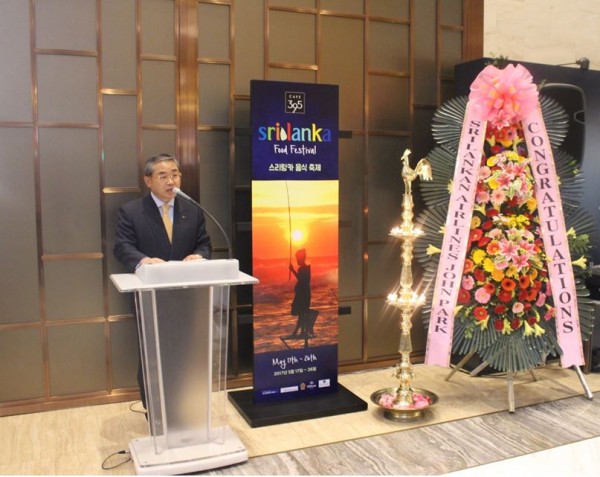 Chairman Korea Importers’ Association Shin Myoung-jin addressing the invitees at the Sri Lanka food festival inauguration at the Millennium Seoul Hilton on 17 May. 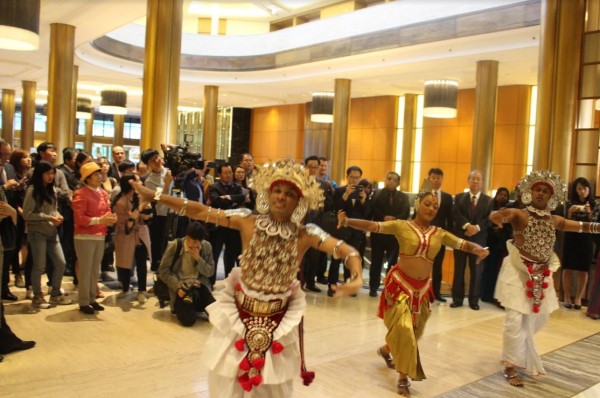 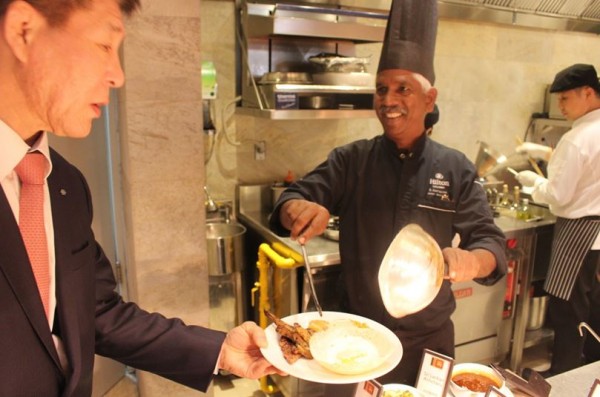 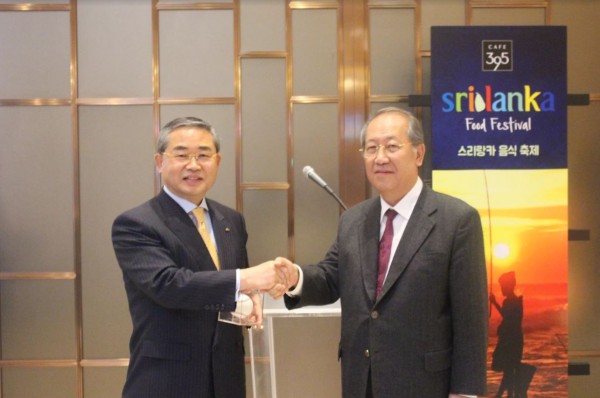 President and CEO of Skyline Sports Inc. Lah Jehoon presenting a baseball produced in Sri Lanka to Chairman KOIMA Shin Myoung-jin at the food festival inauguration.  Skyline Sports Inc. holds the majority market share for baseballs in Korea, and in 1988 Skyline baseball was selected as the official baseball for the Seoul Olympics.  Skyline now supplies to all Korean professional baseball clubs in KBO League, and also exports to US and Japan. 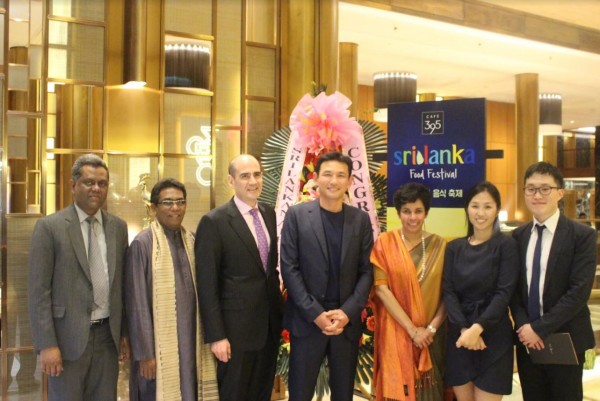 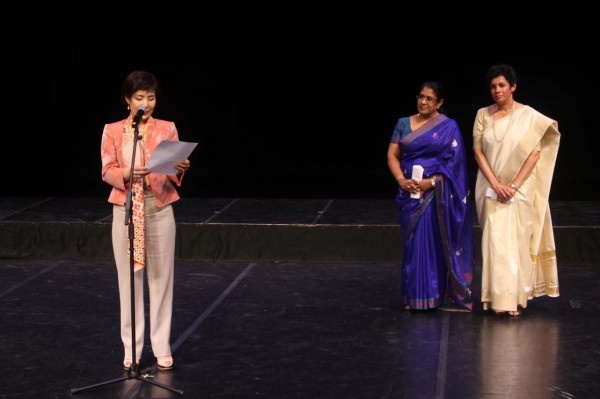 The Ambassador for Public Diplomacy of the Korean Ministry of Foreign Affairs Park Enna delivering congratulatory remarks before the commencement of the Ravibandu Vidyapathy dance performance organised by the Sri Lanka Embassy in Seoul and the Korea Foundation to celebrate 40 years of diplomatic relations between Sri Lanka and the Republic of Korea.  Sri Lanka’s Minister of Foreign Employment Thalatha Atukorale and Sri Lanka’s Ambassador the Republic of Korea are also in the picture. 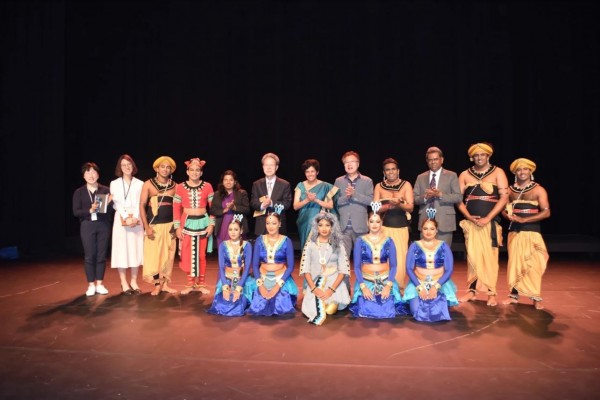 Ambassador for International Relations of the Gwangju Metropolitan City Chung Dong-Eun,  Sri Lanka’s Ambassador to the Republic of Korea Manisha Gunasekera, President of the Asia Culture Center Bang Sun-Gyu, Master Ravibandhu Vidyapathy, Minister Counsellor (Commercial) of the Sri Lanka Embassy Jagath Abeywarna with the dance troupe and other staff after the performance at the Asia Culture Center in Gwangju. 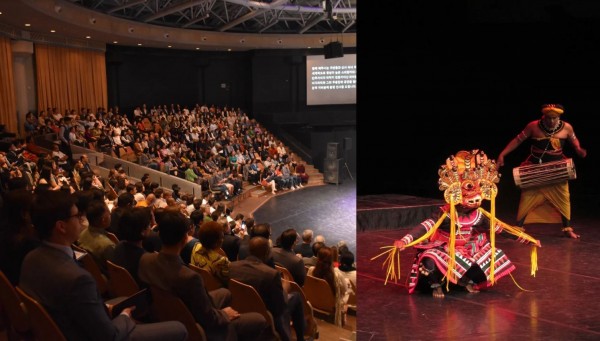 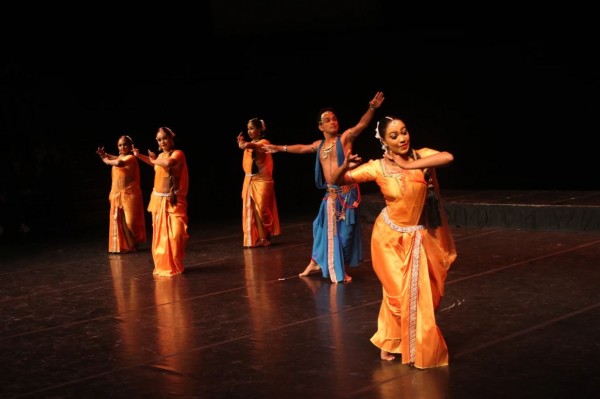 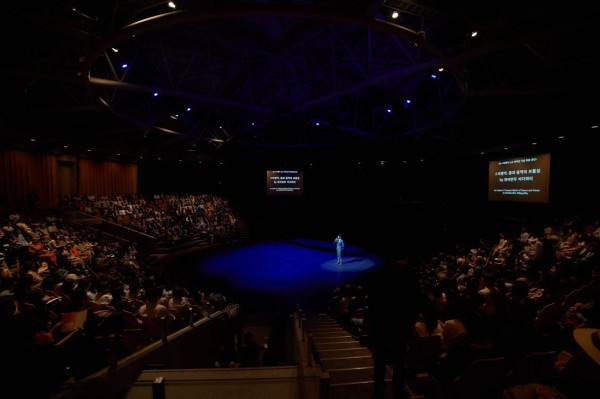 People watching the dance performance at the National Theatre of Korea in Seoul.

in Seoul and Gwangju

The Sri Lanka food festival was inaugurated at the Millennium Seoul Hilton on Wednesday 17 May with a sumptuous array of Sri Lankan dishes laid out for food lovers in Seoul.  Chef Selliah Karuppan from the Hilton Colombo was especially flown in for the second consecutive year to prepare a range of authentic Sri Lankan dishes with the Millennium Seoul Hilton, showcasing the rich culinary heritage of Sri Lanka.  The preparations included egg hoppers, kottu, yellow rice, string hopper pillaw, crab curry, cashew curry, fish ambulthiyal, brinjal moju, cutlets, devilled beef and prawns, and Sri Lankan specialty desserts such as watalappan and coconut rock.

The food festival was inaugurated by Sri Lanka’s Minister of Foreign Employment Thalatha Atukorale, Chairman of the Korea Importers’ Association Shin Myoung-jin and Sri Lanka’s Ambassador to the Republic of Korea Manisha Gunasekera, among other dignitaries.  Senior representation from KOIMA, the Korea EXIM Bank, and other agencies, Korean celebrities, the business community and travel trade, sponsors, and the media participated in the inauguration enjoying authentic Sri Lankan food, Ceylon tea and traditional Sri Lankan dance.  Spa Ceylon products were on display exhibiting the healing and wellness traditions of Ayurveda.

Minister Atukorale in her remarks indicated that Sri Lanka has been part of the historical Spice Route since time immemorial, and that Sri Lankan food has been cross-fertilised over centuries by Portuguese, Dutch, Southeast Asian and Indian cuisine, among others. The combination of spices, coconut milk and coconut oil, vegetables, fish and meats, and the use of clay chattis or cooking pots, all contribute to the end product of complex yet exquisite dishes, she noted.  Chairman KOIMA welcomed the showcasing of Sri Lanka culinary traditions in the heart of Seoul.  The food festival which is organised by the Sri Lanka Embassy and the Millennium Seoul Hilton in association with the Hilton Colombo continues until 26 May.

Two dance performances by Sri Lanka’s renowned and internationally acclaimed choreographer–percussionist Master Ravibandhu Vidyapathy and his dance troupe delighted Korean art lovers at two packed performances at the National Theatre of Korea in Seoul and the Asia Culture Centre in Gwangju, on Friday 19 and Sunday 21 May, respectively.  The performances included a repertoire of classical Sri Lankan dance including Vannam, Ves, Thelme, Salu Paliya; traditional Sri Lankan drum arrangements displaying the intricacies of rhythm and technique; and adaptations of modern ballet such as Macbeth.

The dance performances were organised by the Sri Lanka Embassy, the Korea Foundation and the Asia Culture Center in Gwangju as part of a series of promotional events launched to celebrate 40 years of diplomatic relations between Sri Lanka and the Republic of Korea.  The event in Seoul was attended by Sri Lanka’s Minister of Foreign Employment Thalatha Atukorale and the Ambassador for Public Diplomacy of the Korean Ministry of Foreign Affairs Park Enna as chief guests.  Sri Lanka’s Ambassador to the Republic of Korea Manisha Gunasekera presented the 40th anniversary souvenir published by the Embassy to the Sri Lankan and Korean chief guests on the occasion of the performance in Seoul.

The Ravibandhu performance in Gwangju was attended by the President of the Asia Culture Center Bang Sun-Gyu and Vice Mayor of the Gwangju Metropolitan City Park Byung-ho, among other dignitaries.  Korean lovers of classical dance and music, other dignitaries and the diplomatic corps participated in the events.  The Korea Foundation as well as the Asia Culture Centre in Gwangju appreciated the unique opportunity to introduce the rich heritage of Sri Lankan dance and music to the Korean public.  The events were also supported by SriLankan Airlines, Korean Air, Sri Lanka Tourism Promotion Bureau, Sri Lanka Bureau of Foreign Employment and other sponsors.